If you’ve ever seen the Joffrey Ballet perform its signature dance “Light Rain,” then – regardless of whether you are aware of it – you’re familiar with the music of Doug Adamz. Back before the s became a z, Adams introduced most of the rest of the world to world beat music. With their initial offering, Dream Dancer (Magi, 1977), Doug Adams & Light Rain precipitated the first drops of what would become a downpour of sound. Some labeled the music New Age, others called it World Beat. However you look at it, Doug Adams, by lacing violin melodies around rhythmic percussion, helped develop a genre that has expanded exponentially since its inception. (And when the Kronos Quartet hops aboard an album with you, there must be something magical happening!) Admittedly, I sometimes shy away from this genre, but Adams & Light Rain’s Dark Fire (Magi, 1993) is a collection I come back to on a regular basis.

Doug Adamz also has been leading his down-home and countrified band, Bravo, for 20 years. And they just released a new CD, Down By The Riverside. I failed to inform you of their CD release party a couple of weeks back, but you can check out round two at Rancho Nicasio on Saturday, 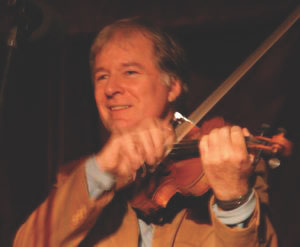 If you attended this year’s Mountain Play (and I’m convinced that every county resident hiked down with me one Sunday), you heard Doug Adamz & Bravo entertaining after the cast left the stage. Those down-home tunes you enjoyed as you lingered over what was left of your picnic lunch are some of the same toe-tappin’ songs on the new release. And how appropriate it was to have Adamz providing post-production entertainment at Oklahoma! His father hailed from that state and his mother’s family moved there when she was a little girl.

Adamz, who plays fiddle, guitar and harmonica, was born in West Texas, and migrated to the West Coast three decades ago. His songwriting skills have caught the attention of everyone from the aforementioned Joffrey Ballet and Kronos Quartet to Dr. Elmo, who’s recorded a couple of Adamz’s tunes. If you’ve ever heard ‘‘Uncle Johnny’s Glass Eye,” you can thank Doug Adamz (and his great uncle Johnny) for that one. As luck would have it, there’s an upcoming opportunity to see both of these Novato-based musicians August 20 at the Larkspur Café Theatre when Adamz opens the show for Dr. Elmo &Wild Blue.

But back to the Nicasio show with Doug Adamz & Bravo. Adamz is joined in this band by bass-and-banjo man Bill Amatneek, who, besides writing and telling quite entertaining tales, has played with Kate Wolf, the David Grisman Quintet, and a few local folks of the surname Rowan. Russ Gauthier, whom you may have seen playing guitars and other stringed things with New Riders of the Purple Sage, is also aboard Bravo. The topnotch musicianship and front porch feel of Down By The Riverside make the new disc already seem like an old friend. I’ve gotta tip my hat to Adamz for his chameleon-like knack to create innovative and authentic music within whatever territory he explores.