A sample: "That fateful day/when the heroes rode by the farm/they came with thundering drums and cymbals/hurdy gurdy and tambourine/In their arms/They carried not swords or clubs or guns/No, their Excalibur sported strings/And could hum a chord/that would shake the world/Airship, Dreamship, Ship of Sound"

I kind of like that. Guitar as weapon of peace.

"I was thinking about how the guitar has become iconic for our generation," Doug said, speaking of the baby boomers and war babies. "Everybody plays the guitar. But it hasn't always been like that. Even in the roots of country music the guitar wasn't used that much. It was mostly fiddle and banjo and mandolin. In our generation, though, it became the mainstay. I was thinking about how influenced we all were by rock 'n' roll in the '60s. For us, it's the guitar as Holy Grail." 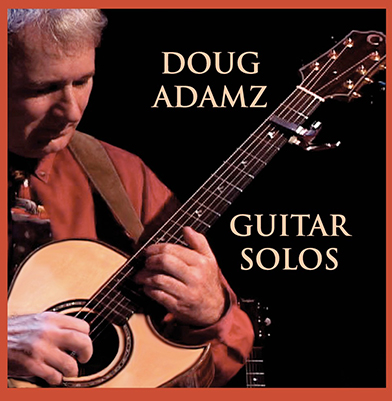 "Guitar Solos," featuring Adamz on solo acoustic guitar, was written and recorded at his girlfriend's home studio in Marshall, hence the track "Mars Hall." Get it?

I've got Bruce Cockburn's instrumental guitar album, "Speechless," on permanent rotation on my CD player at home. It makes for pleasant and yet stimulating background music when people are over, and I'm putting "Guitar Solos" right next to it as a perfect companion CD.

Adamz is one of the most versatile musicians I know. He's best known in these parts as the leader of the Americana band Bravo. As a matter of fact, he performs with that group March 23 at West Marin's Rancho Nicasio.

But he has four CDs under the banner of "Light Rain," exotic pieces with snaking Arabian rhythms that were written for belly dancers. The original "Light Rain" composition in 1977 was discovered by the Joffrey Ballet, which set a dance to it that became one of its signature works.

With "Guitar Solos," Adamz mines that solitary territory that's familiar terrain for guitar players of all abilities - those times when it's just you and the guitar and whatever you can make come out of it.

"Playing the guitar is something if always done all along," Doug said. "It's kind of home base for me. Among all the things I've tried to do, I've always come home and played my guitar. This album is the stuff I play by myself at night in the kitchen. I finally got around to recording it."