Riding a memory out of 1969, we pass La Cantina, just down from the public library.  There flamenco aficionados, social activists, and poetes maudits bent elbows at the bar with window decorators and constructions workers.  Doug Adamz road a stool on a raised platform, his guitar an oar, or sail maybe: his hat thrown back, eyes closed, mouth agape in the blues of his youthful angst-“Corrina, Corrina, where you been so long?” – the audience carried on the sea-swell of his earnest love. 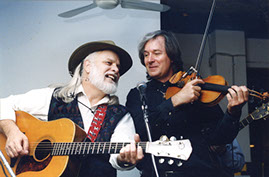 At a free concert on the (Rio Grande) Upper Valley levee-bikers, hippie dudes and chicks, lonely cowboys and soldiers danced next to pushers and narcs, all grooving on the blatant blue growl of Wailing Wall-Doug Adamz’ harmonica lifting sparkles out of splashed-up river water, as paradise descended onto us like a coronet, the diadem of sunset.  Later that night at the old Free Holy in Anapra, stage lights shone on guitar strings like a highway of glass.  I may have been under 250 mics of microdot, but that night Doug’s harmonica sounded like Gabriel’s or Louis Armstrong’s muted trumpet.

Doug left for California in 1973, left his small apartment in Sunset Heights, left his friends.  Out there, playing fiddle at a San Francisco trolley turn-around, he met a beautiful California-blonde belly dancer- De Ann.  Camera moves in on the scene-a dancer in beaded and besequined halter and skirts behind pastel gauzy veils, swirling about, hips dipping and thrusting, all shimmery like a houri in paradise.  Doug wailing on his blue violin, bent over to a sensuous beladi rhythm, like a gypsy in firelight.

Flash forward to the bicentennial year, to a multi-media performance in the old Montana Avenue museum’s auditorium.  Three figures on stage (Mary Hill, Judy Marcus and David Wagnon) do the dance of the Swans as focus settles on one feather-clad dancer crawling between the legs of another, as if being born.  My tears welled up at the beauty.  Then Doug, David and Hal Marcus took the stage to create a three-man action painting.  Later that evening, the artists, dancers, poets and musicians gathered at Madeline Park in Kern Place, all cavorting under what must have been a full moon.  A poet (me), a musician (Doug), and a painter (Hal), agree to encourage and support each other in our various arts.  Hal dubbed our journey-Paso Al Sol. 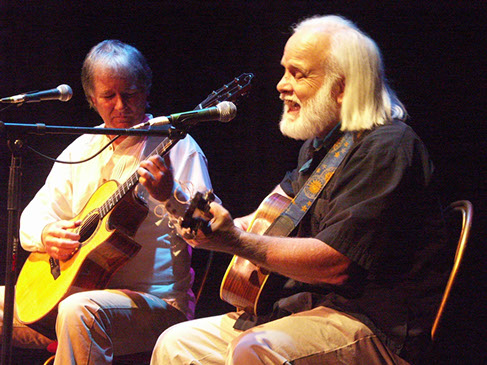 On a summer night in 1979-I just in from Austin and Doug  from San Francisco-we met at Hal’s to share new songs.  I had my guitar.  Hal played his doumbek (hand drum), and Doug, of course, on guitar, harmonica and violin.  Doug's brother, Darrell, was there playing bass, and another fiddle player, Bobby Napier, showed up.  So Hal turned on the tape recorder to document the music.  How often I have listened to that tape of the Gallery Sessions.  Many of the songs that Doug and I played were later released on our albums.  I first heard Doug’s sinuous song, “Babylon,” and I shared my lament on divorce, “Independence Day”.  But what the tape captured as well was the energy, the synergy that arose from ten years of music and friendship.