As one of Marin's mainstay musicians,  Adamz has followed his fine “Guitar Solos” CD with another unadorned album that showcases his clever songwriting and seasoned musicianship. 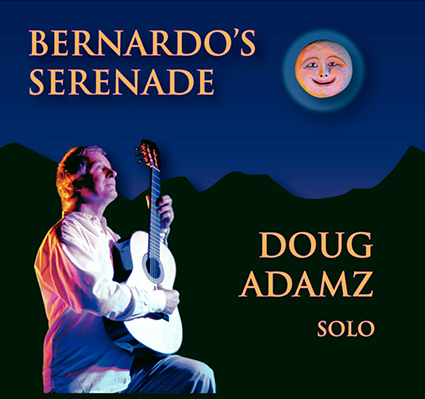 A transplanted Texan, he pokes fun at his Tex-Mex roots with the tongue-in-cheek title track, a dryly humorous courting song about hiring a crooner named Santiago to woo his lady love. “For him you might fall,” Adamz sings, “if he doesn't get drunk as a pig and not show up at all.” “The Authentic Skulls of Pancho Villa” continues in the same humorous border song vein. Adamz tells his story of “passionate buffoonery” with authentic Juarez accents and flamenco guitar flourishes.

“Uncle Johnny's Glass Eye” is yet another weirdly whimsical family ballad built around a tale told by an Oklahoma relative that resolves into a mellow rendition of “Old Dan Tucker.” “Doniphan Drive” is nothing more or less than a solo harmonica showpiece, as is “Lifer,” the instrumental track that closes the CD.

In between are what Adamz quite accurately describes as “tales of old Juarez, songs of love and work, dust devils, water spirits and other natural wonders, the blues, and a mystical description of the life of a desert poet.”

Adamz is best known in Marin for his regular appearances at Ranch Nicasio with his band, Bravo. He achieved his greatest recognition in 1977, when his composition “Light Rain” was discovered by the Joffrey Ballet, which set a dance to it that is now one of its signature works.

On “Bernardo's Serenade”, recorded at the cleverly named Mars Hall studio in West Marin's Marshall, Adamz is in top form as a singer, storyteller, songwriter, instrumentalist, humorist and man of many talents.