"translation" below (courtesy of Google translate) 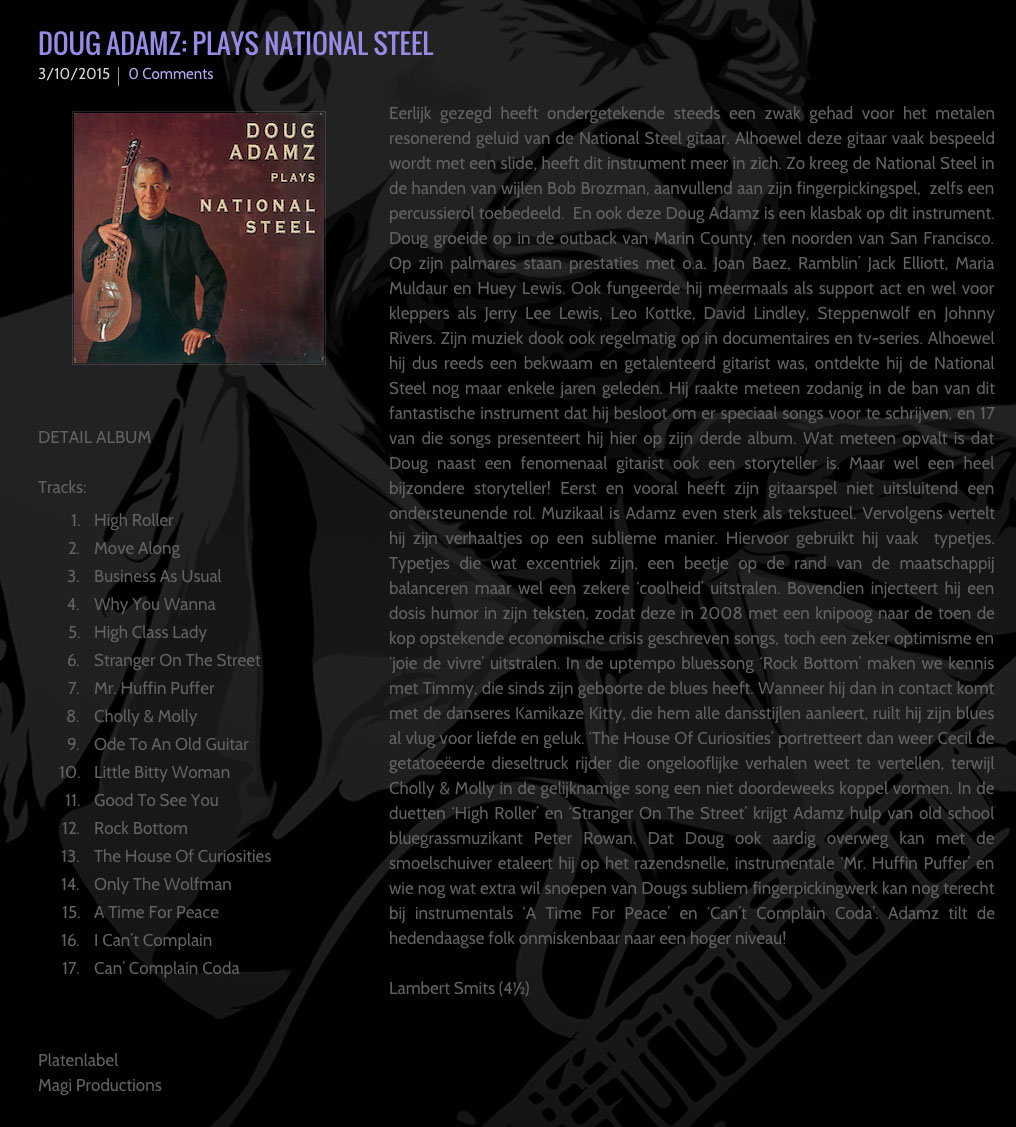 Frankly undersigned has always had a weakness for the metal resonant sound of the National Steel guitar. Although this guitar is often played with a slide, this instrument has more in it. For example, the National Steel was in the hands of the late Bob Brozman, in addition to his fingerpicking game even assigned a percussierol. And this is Doug Adamz a class act on this instrument. Doug grew up in the outback of Marin County, north of San Francisco. His list of achievements include Joan Baez, Ramblin 'Jack Elliott, Maria Muldaur and Huey Lewis. He also served several times as a support act and so much for the likes of Jerry Lee Lewis, Leo Kottke, David Lindley, Steppenwolf and Johnny Rivers. His music also appeared regularly in documentaries and TV series. Although he then already was a skilled and talented guitarist, he discovered the National Steel only a few years ago. He immediately became so captivated by this amazing instrument he decided to write special songs for it, and 17 of those songs he presents here on his third album. Striking is that Doug beside a phenomenal guitarist is also a storyteller. But a very special storyteller! First and foremost, his guitar playing is not only a supporting role. Musically Adamz as strong as lyrically. Then he tells his stories in a sublime way. For this he uses often cameos. Typetjes which are somewhat eccentric, balancing a little on the edge of society but does exude a certain 'coolness'. Moreover, he injects a dose of humor in his lyrics, so that in 2008 with a nod to the then-emerging economic crisis written songs, yet a certain optimism and joie de vivre "to convey. The uptempo blues song 'Rock Bottom' we meet with Timmy, who has the blues since his birth. When he comes into contact with the Kamikaze Kitty dancer who teaches him all dance styles, he trades his blues soon for love and happiness. 'The House Of Curiosities "portrays again Cecil tattooed diesel truck driver who knows how to tell incredible stories while Cholly & Molly in the same song form a non weekdays couple. In the duets 'High Roller' and 'Stranger On The Street' Adamz gets help from old school bluegrass musician Peter Rowan. Doug is also quite handle the mug slider he displays on the rapid, instrumental 'Mr. Huffin Puffer "and who wants some extra snacking Dougs sublime fingerpicking work can still contact instrumentals" A Time For Peace "and" Can not Complain Coda '. Adamz tilt contemporary folk unmistakably to the next level!